close
FREE SHIPPING WORLDWIDE Over 50% Off for a Limited Time.

With a single tap of a card, elderly pedestrians and those with disabilities can now get a few extra seconds to make their way across Hong Kong’s busy roads.

The Transport Department on Thursday rolled out a new smart device at a pedestrian crossing in North Point on Hong Kong Island under a trial scheme.

The device is attached to a traffic pole. When someone taps it with an Octopus card for the elderly or a personalised Octopus card registered with the “Persons with Disabilities Status”, the blinking green light will flash for 16 seconds, up from the usual 12 at the North Point location.

A new countdown display next to the green man also shows how much time is left for pedestrians at the crossing. “Hong Kong’s ageing population is increasing. We introduced this smart device as part of a policy address initiative in 2016 to look at how technology can help the elderly cross roads safely,” the department’s chief engineer, Wong Chi-hung, said.

The North Point site is the first of nine locations across Hong Kong where the smart device will be installed for a six-month trial.

The locations are generally near facilities that elderly and disabled people often visit, such as nursing homes, rehabilitation day care centres or old housing estates.

The extension of the blinking green light is meant to give an elderly person – with an average walking speed of 0.9 metres per second – enough extra time to cross one car lane. The extra time will vary between three to four seconds – or a third of the usual time – depending on the location and the size of the crossing, the department said.

The current green time for a pedestrian light ranges between 10 seconds and one minute, depending on the size of the crossing and the volume of pedestrian and vehicular traffic. 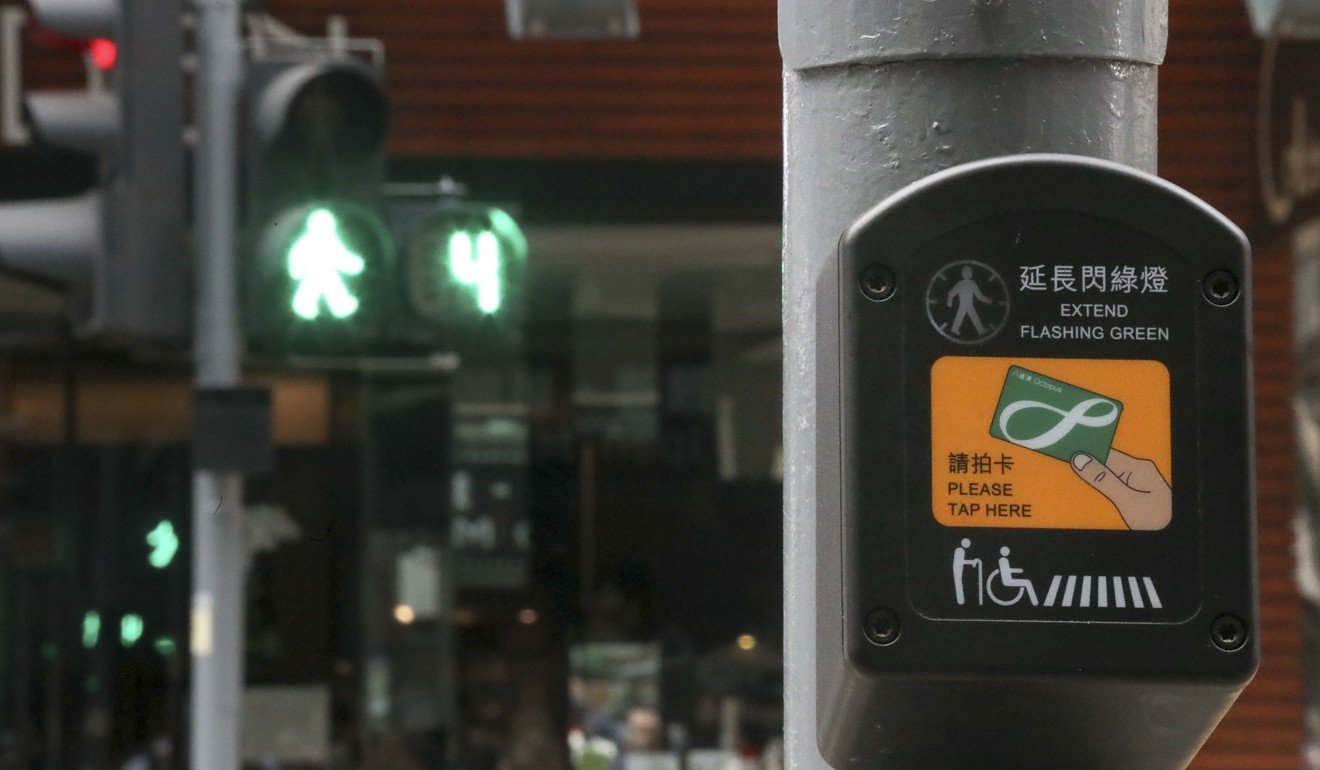 The trial is the first of its kind and is part of the city’s efforts to deal with the coming “silver tsunami”, in which the population of those aged 65 and above is projected to double and hit 2.3 million in 2034. By then, old folks will form a third of the city’s population.

The device costs about HK$500,000 (US$64,000) to set up and is similar to a smart card reader system in Singapore that has been in use since 2009. The island has some 500 such crossings, and popular ones see the device activated up to 50 times a day, according to the city’s Land Transport Authority.

Hong Kong’s ageing time bomb a cause for concern

Ying Tung, 87, who walks with a cane and with the help of a domestic helper, said she would definitely use the device.

“I have bad knees, I can just about cross the road [even with the added time],” Tung told the Post.

But 75-year-old Grandma Cheung said it would be too inconvenient for her to rummage through her bag for her Octopus card.

“I have one hand holding my walking cane, and I can’t move the other because I had a stroke. How am I going to get the card? I might as well just cross the road first,” Cheung said.

Wong, from the Transport Department, said that the device should be activated on a need-only basis.

“It would seriously affect traffic if the time was automatically extended even at times when there may not be elderly who need to use the crossing,” Wong said.

He said the government would collect data on how often the device was used and monitor traffic conditions to determine the scheme’s effectiveness.

The device does not deduct any money from Octopus cards or record any personal information.